Visiting the Ngorongoro Crater: What to Expect

Visiting the Ngorongoro Crater in Tanzania, East Africa, is on many a traveler’s bucket list. The crater is actually a caldera, meaning it’s a prehistoric volcano that fell in on itself, and over the millennia became populated with incredible wildlife. Because of the steep walls of the crater, many animal species were trapped inside, unable to migrate far, which means the crater is home to some rare lineages, such as the critically endangered Black Rhino, that have been somewhat protected inside the crater. No human settlements or structures are inside the crater, but the area is open to 4×4 jeeps for tours. The outside area of the larger Ngorongoro Conversation Area is full of human life, from luxury lodges and modest campsites to researchers and Maasai communities. You can read more about why this place is so special on the UNESCO website.

Getting the most out of your experience of visiting the Ngorongoro Crater will mean that you’ll need to go there as part of a guided safari. This will ensure you have the proper permits to enter the Conservation Area and to get around inside (unlike in a lot of western national parks, there aren’t a lot of self-service or independent ways to visit). Be sure to hire an operator that will take you not only to the lookout point to see the crater from above, so that you can appreciate it’s scope and depth (this part is fairly easy–almost every vehicle will stop to do this on their way to Serengeti National Park); you’ll also want to do at least one game drive inside the crater in a 4×4 jeep. I visited the Ngorongoro Crater as part of a 2-night safari booked by Dragoman to Ngorongoro and Serengeti National Park on their Africa East & South between Nairobi and Dar-es-Salaam tour. As I mentioned in my post about what to expect from a Masai Mara safari in Kenya, if you are part of an overlanding tour, it’s crucial that your tour operator hires out for safaris. Overland trucks can’t handle the terrain for good game drives, and this is especially true for the steep descent into the Ngorongoro Crater. This is just one of many reasons to book with Dragoman. Furthermore, it’s much easier to make a quick repair or change a tire on a jeep than an overland truck–and trust me, your jeep will get waylaid at some point. Hence the motto, “No hurry in Africa!” 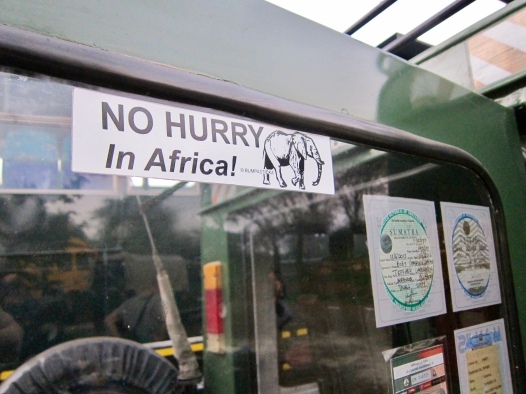 If you are part of a camping expedition, you’ll likely be picking up supplies in the tourist-friendly city of Arusha, which sits between the Serengeti, Mt. Kilimanjaro, and Tsavo National Park in Kenya. The name of the city might sound familiar to some–it was where the International Criminal Tribunal for Rwanda was established in 1995 and it is the site of the African Court on Peoples’ and Human Rights. All of these factors give Arusha a very international feeling, with good restaurants, banks, shops, and roads, which is welcome after a trip to the bush. You can even have a dress custom made from traditional African fabric, to be picked up on your way back through town.

There’s a large visitors’ center at the main gate to the Ngorongoro Conservation Area where you’ll be able to buy snacks and, use the restroom, have a picnic, and also view a large-scale model and exhibition about the crater.

You’ll hang out while your guide arranges your permit. My favorite part of the visitors’ center was buying $10 worth of souvenir bumper stickers with slogans like “Only Elephants Should Wear Ivory” and “Let the Rhino Keep Its Horn.” Fantastic mementos that won’t take up precious space in your pack.

Once inside the Conservation Area, it won’t take long to get to the lookout point where you’ll be able to see the entire crater. There is a crowded viewing platform where you can take photos and videos, but you likely won’t be there for more than twenty minutes or so. 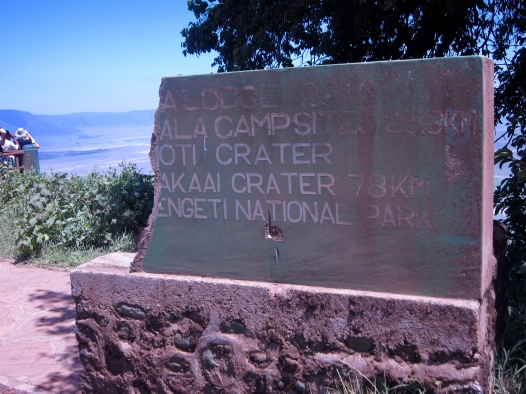 Such a vast expanse is actually rather hard to photograph, especially in bright midday sun, but it’s nonetheless unforgettable.

Continuing along the road through the Conservation Area, you will likely see jeeps and overland trucks stopped off, with guides doing DIY repairs. It’s common for fellow guides to get out and help other drivers get back on the road, so make sure you have snacks and reading material available to you inside the jeep to keep yourself occupied. You’ll also likely see Masai farmers, in their distinctive red outfits, tending to livestock. In general I would avoid photographing the Masai unless expressly invited to, and even then I would probably give them a tip in local currency for the privilege. This is their home.

On our safari, we drove to the Serengeti to spend a night and the following day, and then came back to the Ngorongoro Crater to camp along its edge and do an early morning game drive. We stayed at the popular Simba Campsite, which had nice bathrooms and hot showers, as well as a covered, locked area for food. In Arusha, our Canadian tour leader had bought the makings for s’mores to eat around the campfire that night, which very few of our European fellow travelers had ever tried. There were tons of other groups there, including a group of middle-schoolers from Israel, so I felt that we must be pretty safe even if we were in the open wilderness with a ton of wild beasts on all sides. After the sun went down, as we were all getting ready for bed, a rumor broke out that there was a lioness stalking the camp, just beyond the bathrooms, and in the dark night I do think I could see her eyes staring us down. I woke up to snorting noises in the night, and figured some warthogs had come to visit, but in the morning we saw massive Cape Buffalo droppings all around our tents. Cape Buffalo are the least treasured of the Big 5, but are also the most dangerous! I was glad I had not gone to investigate in the night.

For an early morning game drive into the Ngorongoro Crater, you’ll wake up before dawn so that you can watch the sun rise over the edge. It was very chilly–I ended up wearing a few sweatshirts and a headband even inside the jeep.

There is a steep road down to the crater’s floor.

Inside the crater, our guide showed us all kinds of wildlife. We didn’t see any rhinos (supposedly, there is a population of 26 Black Rhinos in the crater), but we saw lots of zebras, wildebeests, warthogs, and a mass of flamingos gathered along the lake at the center of the crater. 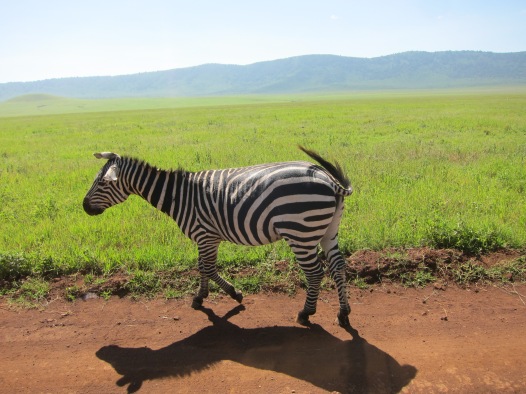 Just the vistas themselves were stunning. It was like being inside a 12-mile-wide bowl.

There aren’t any bathrooms inside the Ngorongoro Crater, so you might find yourself going behind a jeep. Watch out for large predators! (And be sure to pack your toilet paper to discard once you leave.)

Save Visiting the Ngorongoro Crater: What to Expect for later!