Visiting the Giraffe Center in Nairobi, Kenya: What to Expect

If you are planning on visiting the Giraffe Center in Nairobi, Kenya, here’s what to expect:

The Giraffe Center is one of the most popular attractions for tourists visiting Nairobi. The official name for the Center is the African Fund for Endangered Wildlife (Kenya), and the Center sits about 40 minutes outside Nairobi proper. We took a cab there from the Kivi Milimani Hotel. For the equivalent of about USD $20, our driver took us to the Center, waited, and then took us home. On the way out to the Center we drove past Nairobi’s upscale neighborhoods, which felt similar to suburban Australia or California–large houses surrounded by green–a stark contrasts to Nairobi’s Kibera Slum, which we also passed through prior to leaving the city. We stayed at the Giraffe Center for about an hour. If planning a whole day of activities, give yourself at least three hours to do this if coming from Nairobi city center.

The Giraffe Center is home to a small population of the endangered Rothschild giraffes, noted for its very clearly defined dark patches lined in bright white. The center was set up in 1979 when a British-Kenyan couple rescued 2 of these animals and brought them back to their land to breed in captivity. Now the descendants are carefully placed in national parks throughout Kenya and zoos abroad, and the species, while still in danger, has gained a bit of a foothold.

Bring cash to enter the facility–it costs 1000 Kenyan schillings. Once inside, follow the directions toward the fenced-in estate grounds where the giraffes live. (Side note: In Swahili, “twiga” means giraffe.) You’ll be protected from the animals (and the animals protected from you!) by a wall of about five feet. Right away you will be able to feed the giraffes using little pellets given to you by attendants. You are free to gently pat the giraffes and take as many photos as you like. 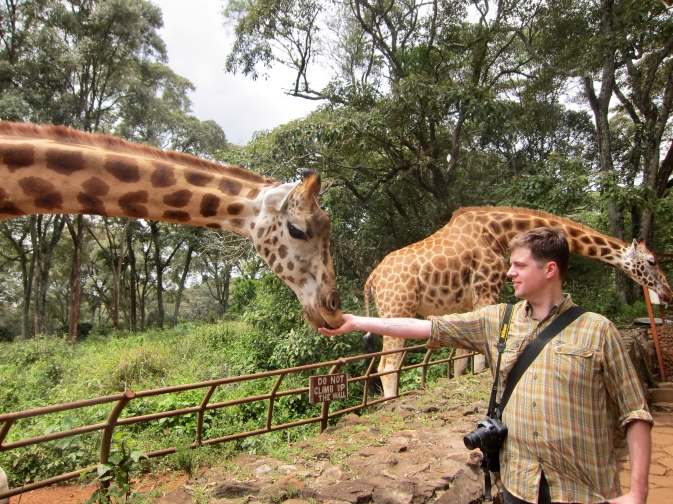 To get a closer look at the giraffes at their full height (almost 20 feet!), you can climb up one story to the Giraffe Center’s lookout platform. Here you can get more pellets for feeding, and the attendants will show you how to “kiss” the giraffes! (It involves holding a pellet in your teeth and the giraffe will take it with its lips. I didn’t try this but it seemed quite safe.) One of the attendants told us to watch out for a certain giraffe because “he likes to head-butt.” 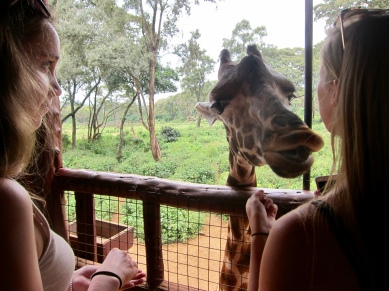 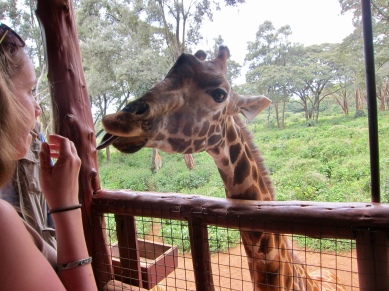 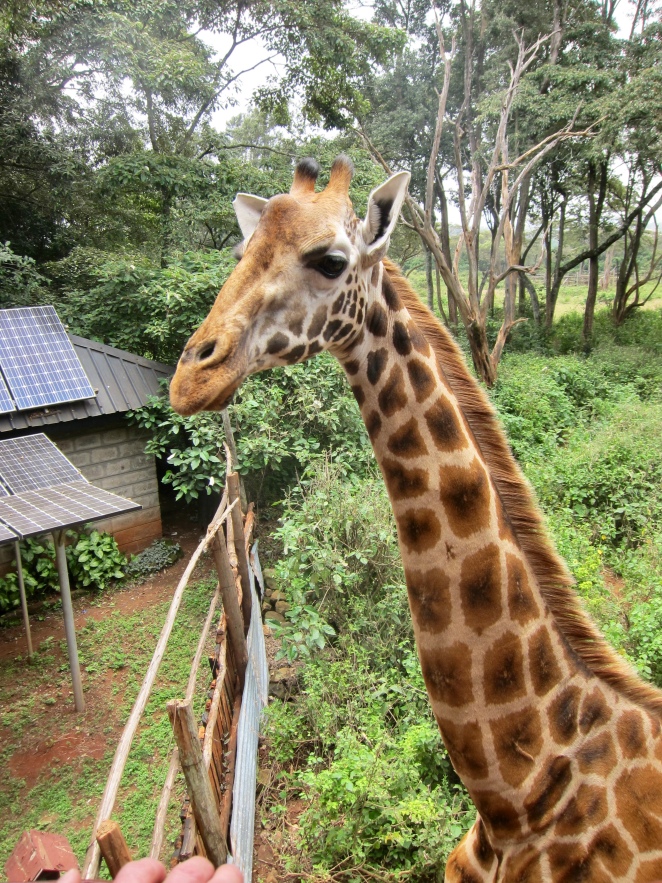 Beyond petting and feeding the giraffes, there isn’t much to do at the Center besides poke around the gift shop, have a drink or snack in the cafe, and people watch. But it’s well worth your time in Nairobi: there are few other chances in Kenya to interact with the beautiful animals in this way, and your visit helps to support the efforts of the African Fund for Endangered Wildlife to keep up this important work of saving the Rothschild giraffe. 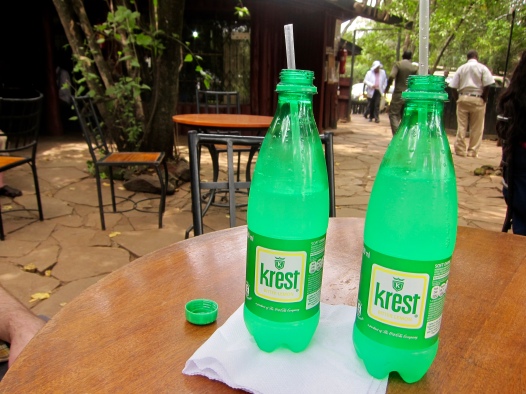 Pin “Visiting the Giraffe Center in Nairobi, Kenya” for later!