Here’s how to visit Belgrade’s Western City Gate, also known as Genex Tower. It’s one of most interesting pieces of architecture in the Balkans, and a great spot to take photos.

Built in 1977, the Western City Gate is formed of two towers with a bridge and a rotunda (with a revolving restaurant inside) at the top. One tower is 35 stories and is for residential use; the other, shorter tower was occupied by Genex, which was an important Yugoslavian petrochemical company. The name sticks, but at the moment the Zepter (a luxury goods company) brand name sits atop the higher tower. There aren’t too many comprehensive English-language resources about the Western City Gate online, but to see more pictures of the towers wearing different advertising banners, head to Atlas Obscura, and for another informed description of an expedition to the towers, check out this 2012 post on The Other Site.

A few warnings before you undertake the journey out to the Western City Gate: When we visited in July 2017, there were no signs that you could visit the viewing deck nor the revolving restaurant; that seems to have been true when The Other Site visited in 2012. We visited on a Friday, and despite the city being full of life elsewhere, the West City Gate seemed almost totally deserted. There is not much to do here besides take photos and explore. If you need a more interactive experience, this might not be worth the longish trek on public transit or the taxi fare. If you are flying out of Belgrade’s Nikola Tesla Airport, which is close to the Western City Gate, another thing you could do is plan for your taxi driver to leave earlier and stop here on your way.

Most visitors to Belgrade will be staying in the more central area of Belgrade on the Eastern side of the Sava River. (This is the side of town that includes the central train station, the Belgrade Fortress, the Tesla Museum, the pedestrian area around Republic Square, and the other main tourist highlights of the city.) The Western City Gate is–surprise–on the far Western side of the city, over the Sava and due northwest beyond the modern Novi Beograd area full of massive apartment complexes, malls, and chain hotel and conference facilities. You can hire a taxi to take you out there, or you can ride the tram or bus.

We rode the tram from Vukov Spomenik station. Buy a tram pass at a kiosk near the station–note that the first kiosk we went to did not sell these, but the second one did, (and the cashier spoke English, which was very appreciated). We purchased two city transit day passes for about 500 dinar each. Then we rode the #7 tram west up Bulevar Kralja Aleksandra, past Belgrade’s main bus station, over the Sava, and into Novi Beograd. The tram is not air-conditioned and can be very crowded. It took about 20 minutes to get from Vukov Spomenik to where we got off the tram near the Ušće Shopping Center. From there we walked along the Bulevar Zorana Đinđića. This is a wide thoroughfare through Novi Beograd with a grass median in the middle, lined with businesses and cafes–it makes for a more hospitable walk than if you take the Bulevar Arsenija Čarnojevića, which is more like a freeway. A bonus to visiting the Western City Gate is this chance to see Belgrade’s blokovi up close–urban neighborhoods built during the Yugoslav Communist era. Each blok is numbered, as you’ll see if you explore around the area on Google maps.

If you aren’t getting cell service in Belgrade, it’s a good idea to save an offline version of Google maps to your phone that covers this area, because you’ll need to turn left off of Bulevar Zorana Đinđića into one of the blok courtyards to cross over to the towers, and this little street/walkway doesn’t seem to have its own name. We ended up getting a little lost in these courtyards, and made our way over to the Bulevar Arsenija Čarnojevića, which, again, is the freeway, but there is a walking/bike path alongside it. And there we started to see the tower.

All in all, this walk from where we got off the tram took at least 45 minutes. If someone knows a more direct way to get to the Western City Gate on public transit, please leave it in the comments. 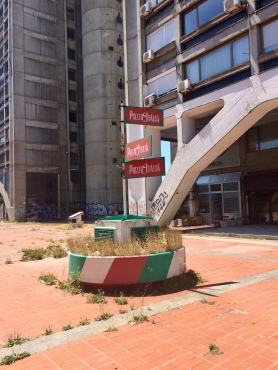 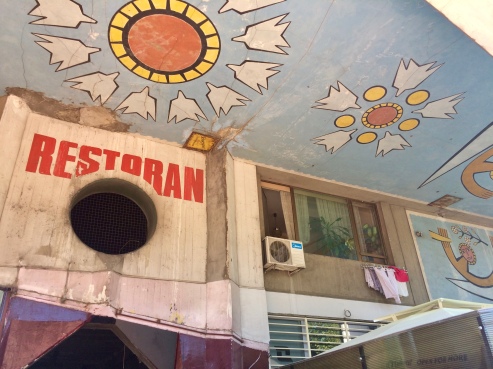 At the base of the tower was evidence of a once-cheerful pizzaria, as well as the entrance to the elevator up to the revolving restaurant (very clearly no longer operational). Even though the tower seemed abandoned, the residences seem to be in use, as evidenced by the laundry hanging out to dry outside one of the windows.

35 stories might not be much in New York, Shanghai, or Tokyo, but here in Belgrade it seemed gargantuan. 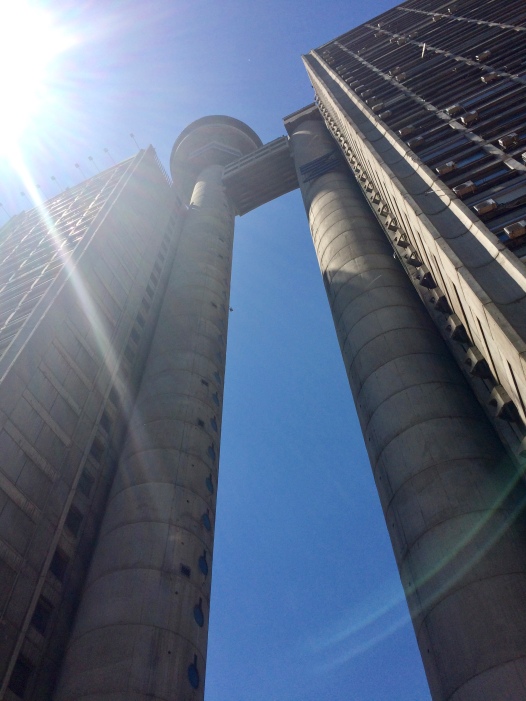 I’m doubtful that the Genex Tower is still in any kind of commercial use for the company. The windows were broken and missing, and there were none of the usual signs that people worked there (such as: people coming in and out of the building). 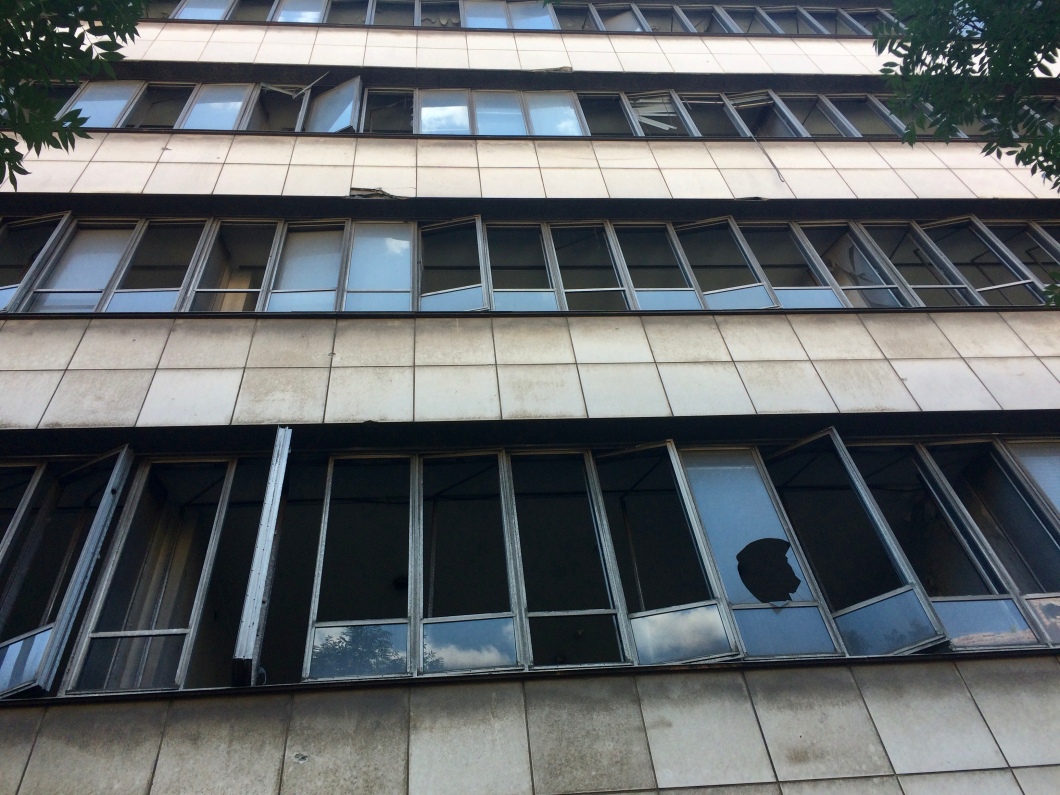 Lower parts of the towers are covered in graffiti. Again, the residential parts of the building seem to be occupied–you can see the window shades at various levels, and air conditioners installed. But still–we saw no one coming in and out of the building. 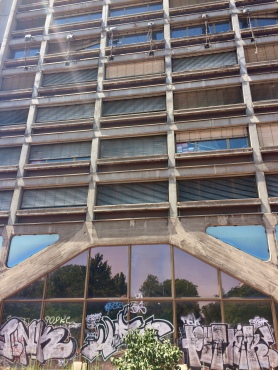 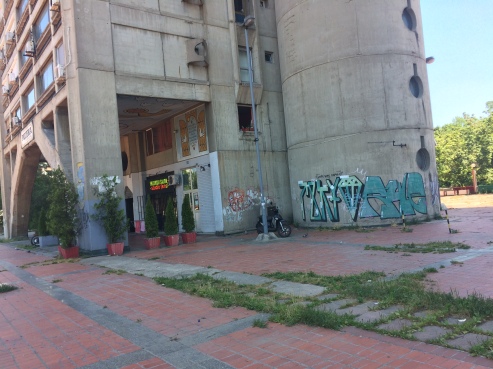 Photographers will enjoy the sense of abandonment. You can take as many pictures as you like, unperturbed. The only difficulty is it’s hard to get far away enough from the building to get a complete shot of it head-on in its environment without running into another building or road.

At the ground level there is a huge red brick plaza with benches and gathering spots, but these were all empty, too.

The seventies-era details under the portico on the northern side of the towers are especially cool.

The hair salon in this photo was the only sign of commercial life we saw at the Western City Gate–this seemed to be open for business.

We only spent about a half hour at the Western City Gate–without being able to go inside, there really isn’t that much to do there. For a lot of visitors, this might not be worth the time spent getting there and back from central Belgrade, but it was one of my favorite parts of our whole trip to the Balkans.

We took a bus back to the center of the city, using our day passes. We just hopped on the first bus going east. Be warned that the transit control on Belgrade buses wears plainclothes, and our passes were checked very quickly. We saw people getting kicked off the bus right away for not having passes or tickets. The bus ride back saved us from walking another 45 minutes back to the tram, but also dropped us in a new part of town at Deligradska. From there it was about a half hour walk back to Belgrade’s center.

Save “How to Visit Belgrade’s Western City Gate” for later!